This is the history of the “The Harsha Monument Company”.
We were founded in April of 1854 by Paul Harsha. Paul, the son of Thomas Harsha, was born in Harshaville, Pennsylvania and in the early 1850’s, migrated to Adamsville, Ohio where he married Duanna Shrigley. In 1854 he removed his family to Highland County and started in the monument business. Three younger brothers were also trained in the business: James in 1855, John in 1869 and Albert in 1871 and all eventually left to start their own firms. James at Circleville, John in Washington Court House and Albert in Wilmington, Ohio which they operated until their deaths. 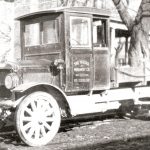 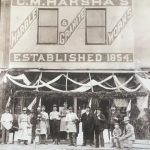 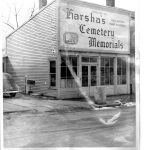 Charles Harsha, born in 1855, entered into partnership with his father, Paul, in 1876 under the name of “Harsha and Son”. He married Elizabeth Holmes, graduate of the Hillsborough Female College and active in the Women’s Christian Temperance Union, in 1878. After the death of Paul, the business name was changed to “Charles M. Harsha”. In 1893 the shop was moved to its present location of 127 W. Walnut Street, Hillsboro, Ohio and renamed “The Harsha Monument Company”.

Paul Harsha II, born in 1882 assumed ownership upon the death of his father Charles in 1913. He was married to Anita Horst a descendent of one of Highland County’s early pioneer James and Mary Ann (Legg) Williams and also of George Gall, Jr. and his wife Susannah Nicholas.

Charles M. Harsha II, born in 1913 joined the firm in 1947. Charles was a 1931 graduate of Hillsboro High School and a 1935 graduate of Ohio State University with a Bachelor’s degree in Business Administration. During World War II he served in the U.S. Army, in the Medical Corps and Finance Department. He was stationed in the Aleutian Islands for 2 1/2 years and the Pentagon in Washington for 10 months. After his discharge in 1945 he worked with Travelers Insurance Company in Columbus, Ohio and the Retail Credit Company, which sent him to their West Virginia offices. Here he met and married Inez Walker and in 1947 returned to Hillsboro to operate the monument company. Charles was very active in the community; a member of the Masonic Lodge where he became a Master Mason in 1940, a member of the lions Club since 1948 serving as secretary four years, president in 1960, zone chairman for two years and the first District Governor of District 13-G from Hillsboro, Ohio and awarded the Hugh Obrien Fellowship Award. He was a Member of the First United Methodist Church from 1948 until his death and served on many committees as Lay Leader and as Choir Director for 10 years.

Charles assisted in the formation of the Highland County Historical Society in 1965, and served as treasurer for many years and as president for six years. He served on the Hillsboro Board of Education from 1957 to 1961 and on the Board of Directors of Highland District Hospital. He was elected as a member of the Board of Directors of the Hillsboro Cemetery Association in 1965 and was elected president in 1972 serving this position through the 1980’s. He was awarded Hillsboro’s Citizen of the Month and commissioned a Kentucky Colonel for the Commonwealth of Kentucky in 1994.

Charles S. “Sandy” Harsha, born in 1946 joined the firm in 1964 and took over operations in 1983. He married Deborah Kellis in 1968 who joined the firm in 1983 and both continue the tradition of community involvement. Sandy was elected to four years as Councilman at Large, two years as President of City Council and eight years as Mayor of the City of Hillsboro. He has served four years as President of the Hillsboro Cemetery Association and is currently on the Board of Directors (2007), he served as Vice President of the Highland County Historical Society and as Building Chairman for the Scott House Restoration Committee. Deborah has served on numerous committees including; Hillsboro Downtown Revitalization, Ohio Valley Resource Conservation and Development Board of Directors, Hillsboro Bicentennial Committee, Board of Directors of Highland County Convention and Visitors Bureau, Chairman of the F.A.C.T. Park Development (Liberty Park) and involved in the fund raising and establishment of the Highland County Family Y.M.C.A., member of the Hillsboro Cemetery Association Board of Directors where she serves as manager.

Charles “Justin” Harsha, born in 1975, joined the firm in 1997 after graduating from the International College of Broadcasting in Dayton, Ohio. He married Alyssa Pennington in 1997. They have been blessed with two children, “Reed” and “Jenna”. Justin is serving his second term on Hillsboro City Council (at large), he has been President of the Hillsboro Cemetery Assosiation since 2011, is current Co-Chair of the Festival of the Bells Committee, member of the Highland County Historical Society Board of Trustees and Manager of the Scott House for the society.